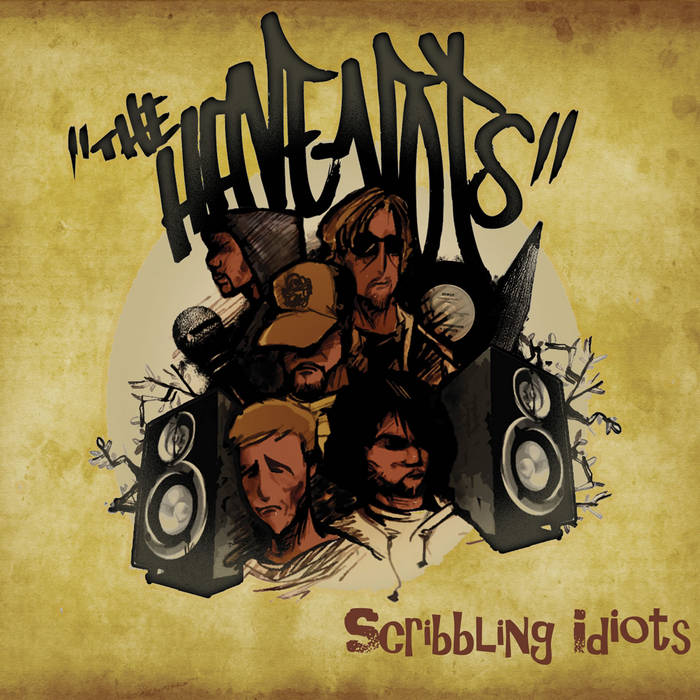 Mark Twain referred to himself as “a scribbler of books.” Perhaps that’s one way to understand why some of the best emcees refer to themselves as “scribblers of rhymes.” Still, Scribbling Idiots is a strange name for a rap group. It doesn’t fit neatly within hip-hop’s current climate of hot-air braggadocio and no-skills posturing. In fact, a group with so much tried and true talent might actually need a self-deprecating name to keep them grounded. Enter Scribbling Idiots.

JustMe and Cas Metah met at Scribble Jam 2002 in Cincinnati, OH. JustMe had paid dues in the L.A. Underground scene, receiving critical-acclaim in magazines such as Rap Sheet and topping the hip-hop charts at Mp3.com. It didn’t take long for Cas and JustMe to recognize each other’s like mindedness, and the duo began recording an album that eventually helped form a massive, worldwide crew.

Included are producer MattmaN (IL), emcees: Mouth Warren (OH), Kaboose (MN), Elias (CA), Ruffian (OH) and producer/emcee Re:Flex (UK). Realizing that live performances were near impossible with this line-up, the original duo decided to focus on their partnership. They released Scribbling Idiots Present JustMe & Cas Metah in 2004, and performed throughout the South and Midwest in support of the album. It was at one of these shows that they would meet another duo that had been making a name for themselves in the Cincinnati area.

Theory Hazit and Wonder Brown had linked up around the same time that Just and Cas had. After rocking shows together the duos joined forces, rounding out the group with Ohio native Mouth Warren. They decided that this would be the core group of Scribbling Idiots. While all the other members would maintain their allegiance, these five emcees would perform and record under the name. When they dropped The Idiomatic Mixtape Vol. 1 in 2005, the comparisons to super-groups like Wu-tang Clan and Hieroglyphics became more and more frequent.

The past few years have been big for S.I.! They’ve shared the stage with notable acts like Blueprint, Glue, Pigeon John, Pack FM, The Pharcyde, and The Dungeon Family’s Witchdoctor. They’ve dropped several side projects, and made numerous standout guest appearances. In February 2007 the Idiots dropped their first 12-inch single “Told You So” featuring Masta Ace. The legendary Juice Crew member co-signed the single by saying: “Scribbling Idiots, this is real hip-hop over here!” Also adding to the group’s buzz is Theory Hazit’s solo debut Extra Credit (Superrappin/Groove Attack), which has received critical praise worldwide since its release. Along the way, each member has saved their best for the full-length crew effort The Have Nots.

Two years in the making, The Have Nots is shaping up to be a fan-cherished classic, featuring guest appearances from Masta Ace and LMNO, as well as production help from CunninLynguists, Supreme Keys, and Vintage. Scribbling Idiots have gone the extra mile to deliver a solid debut worthy of heavy rotation in any hip-hop head’s boom-box (or iPod). Look out world, the Idiots are here!

Semiratruth joins the show to discuss their latest release, "loading..".